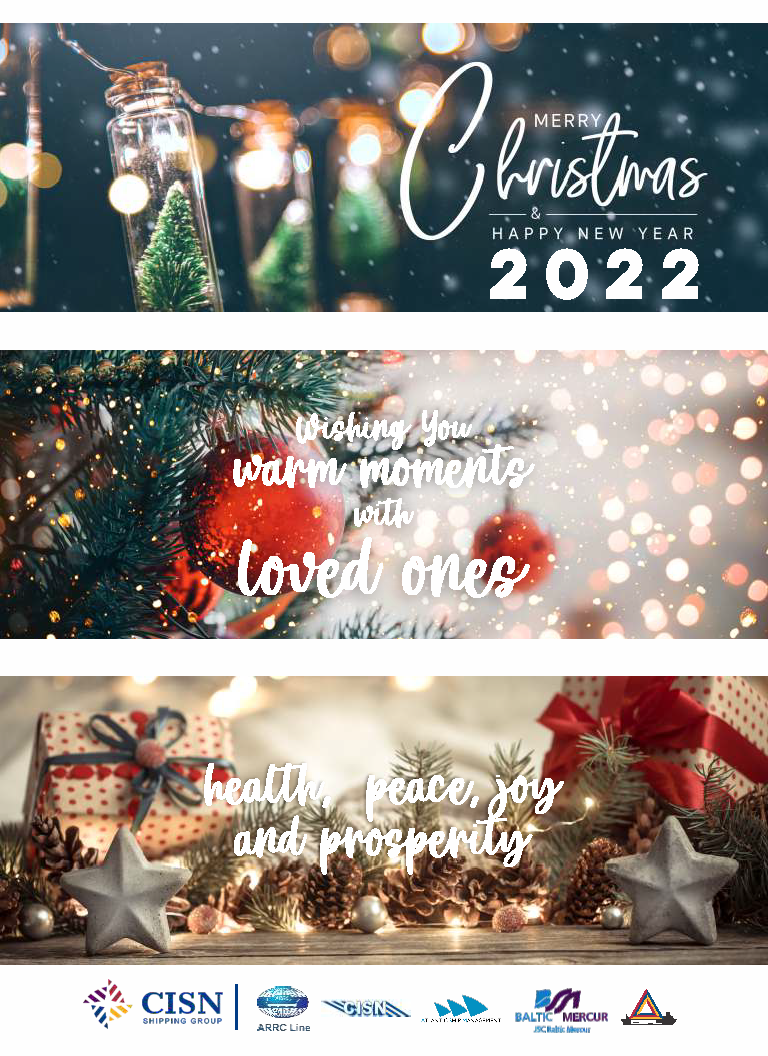 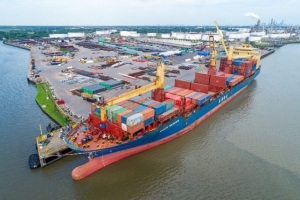 To meet the increasing demands of customers and to continuously expand our footprint, ARRC Line (Atlantic Ro-Ro Carriers) is pleased to announce the launch of a new service by connecting St. Petersburg with ports in South America.

Starting September 2020, ARRC Line is offering the following new destinations with transshipment via the Port of Houston through partner liner services:

The service caters to the MPP cargo segment with focus on but not limited to general cargo, breakbulk/project cargo, and shipper owned containers.

The agent at the port of St. Petersburg is CJSC BALTIC MERCUR and at Houston is ATLANTIC RO-RO CARRIERS OF TEXAS, INC. KMX recently completed the transportation of a series of large, heavy pieces of machinery for a Lehigh Valley manufacturer. The equipment was loaded for export on Atlantic Ro/Ro (ARRC) ships at PhilaPort’s Tioga Marine Terminal.

KMX coordinated the US portion of the move, which consisted of six different shipments that took place over four months. First, they trucked the large pieces from vendors across the US to the KMX packing facility, and eventually to the marine terminal. Next, ARRC shipped the equipment from Tioga Marine Terminal to Saint Petersburg, Russia, on their multi-purpose vessels.  After final assembly in Siberia, the machinery will be used for the energy sector.

The KMX warehouse in Hamburg, PA, where the packing takes place, is equipped with super-duty overhead cranes and other specialty equipment for positioning and wrapping very large objects. Export packing is a complex operation in itself: expensive cargo must be blocked and braced properly to ensure protection for the object and the safety of those moving it. One of the large units for this recent job was encased in over 100 sheets of plywood. Vitez and his team also manage the extensive labeling and documenting procedures for governments here and abroad.

“Ensuring that the INCOTERMS (international terms of trade) were met without incident and on time allowed our customer to get paid in a timely manner from their Russian customer. That’s the ultimate goal,” said Vitez.

Rick Shannon, ARRC Board member, was pleased his company could handle the ocean voyage. “This job was right in our wheel-house,” said Shannon. “We specialize in high and wide cargoes; we have the experience to get difficult cargoes to Russia.”

For 25 years, ARRC has provided the only all-water liner service to Russia without any transshipment in the EU. Their multi-purpose vessels also carry standard ocean containers.

Both Shannon and KMX’s Vitez praised the ILA labor at Tioga Marine Terminal, and the staff at DRS, the operating company at the terminal.  “We really like working at Tioga,” stated Vitez. “They know project cargoes, they have the right equipment, and they get the job done.”

Bob Palaima, President of DRS, highlighted current efforts to increase Tioga Marine Terminal’s ability to handle even bigger project cargo, saying “We are working with PennDOT to get higher clearances under I-95, and a better turn radius for the offramp, as part of the I-95 construction improvements.”

PhilaPort Director CEO Jeff Theobald concluded, “Exports of highly specialized equipment are a boon to Pennsylvania’s economy – and PhilaPort – during these difficult times. We appreciate the roles played by all of our supply chain partners in making this complex logistics operation a success.”

In view of the ever-changing developments with the COVID-19 regulations, ARRC LINE is keeping close communication with our partners to assure our service runs business as usual. With some European countries on lockdown, and increasing rates of infections in the USA, we would like to assure you that our service is still fully operational without any changes. We are closely monitoring the recommendations of the CDC, and of the federal and state government regulations to remain compliant with the safety of our staff, our crew, our vessels, and the cargo we carry.

St. Petersburg: The Federal Government has closed its borders to all foreign nationals except for the movement of cargo. This has no implication on our service, and the port remains open for business.

Canada/USA: Wednesday morning Prime Minister Trudeau announced the closure of the land border to the USA to all non-essential private travel between the two countries. We have received multiple inquiries regarding the movement of freight, and after discussing with our intermodal partners, we would like to assure you that there will be minimal impact to freight moves.

Houston: On the evening of March 18th, two container terminals in the Port of Houston, Bayport and Barbours Cut, were closed due to a confirmed COVID-19 case. They have now since reopened, and although we understand this may cause concern regarding overall port operations in Houston, we assure you that our operations at Manchester Terminal are still running smoothly without interruption. The Houston Ship Channel and the 200-plus private terminals that comprise the greater Port of Houston are still operating.

Philadelphia: On March 16th, the Governor of Pennsylvania announced that all non-essential businesses are to close beginning on March 17th. As stated by the Emergency Order Temporarily Prohibiting Operation of Non-Essential Businesses dated March 17th, the governor indicated that both ports and port-related functions, and manufacturing, industrial production, and warehousing are deemed to be essential infrastructure and are to remain open. We would like to assure you that our calls to Tioga Marine Terminal remain fully operational, and we do not see any disruptions to our service. The full proclamation can be found here.

Baltimore: Steinweg Terminal remains fully functional, with precautions put in place in order to keep health and safety a top priority. Increased regulations are now in effect for all external parties, such as trucking companies entering the terminal area. All visitors are required to complete a Steinweg Health Declaration Form upon entry to the facilities, so some delays are to be expected to keep the health and the safety of the terminal and stevedoring staff. Please contact us for more information.

Antwerp: There has understandably been confusion about the future potential of cargo and vessel movement in Antwerp as some European countries are now in full lockdown. The Port of Antwerp had a meeting yesterday morning which confirmed that the Port is considered as essential national infrastructure, which translates to the port and terminals remaining 100% operational. There have been strict screening procedures and minimal human contact where documentation is exchanged. ARRC LINE’s Transatlantic and European services remain committed to calling the Port of Antwerp on their respective schedules. Full article link can be found here.

As we are an international shipping companies with 6 offices in 4 countries, we remain vigilant in keeping our customers, partners, and suppliers updated with the most recent information available.

Our service portfolio has not changed, and we remain open for business, capable of carrying all types of cargoes from general break-bulk, ferrous and non-ferrous metals, bulk, project and high & heavy, and containers. With our priority berthing arrangements at all of our liner ports of call in the USA, any disruptions or confusion in service at other terminals and shipping lines will not affect our the quality of our USA transatlantic service.

Many of our employees are either working from home, or have blended schedules between home and the office. In any case, we are always accessible by phone and by email. We are pleased to invite you to contact us for any questions, concerns, and freight inquiries.

On January 1st, 2020, the International Maritime Organization (IMO) will implement a new regulation “IMO 2020”, in an effort to reduce the carbon emissions of sulphur oxide produced by marine vessels. Under the new regulation vessels in international waters will be required to use marine fuels with a sulphur content of no more than 0.5% (VLSFO), against the current cap of 3.5% (HSFO).

Like many ship operations, we at ARRC LINE have opted to use compliant fuel in our trade lanes and will therefore supply our fleet with VLSFO as of November 1st, 2019. The blue area on the map shown below marks the areas where IMO 2020 will take effect. Please note that the Emission Control Areas (ECAs), marked in green, will remain at the 2015 standard of 0.1% sulphur content (ULSFO).

Market forecasts suggest that VLSFO will be significantly more expensive, which along with the investments in a treatment program to clean the bunker tanks before the fuel changeover, will have a direct impact on operating costs.

In order to partially offset the effect, ARRC Line will be making adjustments to the BAF structure for all shipments as of November 1st , 2019.

We thank you for your understanding and please contact our representatives with any questions.

We are pleased to announce that we have added a second vessel, m/v Romy Trader, to our ARRC Euroservices.

She will be trading between the ports of St. Petersburg, Antwerp, and Rotterdam with an estimated voyage turnaround time of 15 days.

We are pleased to announce the appointment of TSL Shipping & Trading as our Sales Agent in the USA Gulf. TSL has extensive experience within the projects and breakbulk sector and enjoy a well-established reputation in the U.S. Gulf market.

Over the past 4 years, ARRC has been upgrading our fleet with vessels that offer increased capacity to accommodate the market demands of our clients on our USA/N. Europe/Baltics service. ARRC will continue servicing clients in this trade lane especially where their expertise is needed in the Russian market. TSL will primarily focus on our direct sailings between US and EU ports.

As we enter our 25th year of operation, we are eager to take one more step forward by appointing TSL Shipping & Trading as our Sales Agent in the USA Gulf.

The Journal of Commerce: “Redefining reach and role” 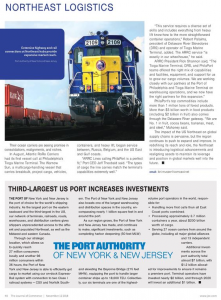 This week, on November 12, 2018, Lori Musser published an article in ‘The Journal of Commerce’, Vol. 19, Issue 23, named “Redefining reach and role”. The article discusses different investments, statistics, and advantages to working with logistics partners in the Northeast United States. Musser specifically discusses how the Port of Philadelphia has improved, with “Pennsylvania Gov. Tom Wolf [announcing] plans to invest $300 million to improve PhilaPort facilties.”

Musser continues:
In August, Atlantic Ro-Ro Carriers had its first vessel call at Philadelphia’s Tioga Marine Terminal. The Warnow Sun, a multicargo-handling vessel that carries breakbulk, project cargo, vehicles, containers, and heavy lift, began service between, Russia, Belgium, and the US East and Gulf Coasts.
“ARRC Line calling PhilaPort is a perfect fit.” Port CEO Jeff Theobald said. “The types of cargo the line carries match the terminal’s capabilities extremely well.”
“This service requires a diverse set of skills and includes everything from heavy lift know-how to the more straightforward container operations,” Robert Palaima, president of Delaware River Stevedores (DRS) and operator of Tioga Marine Terminal, added. The ARRC service “is exactly in our wheelhouse,” he said.
ARRC President Rick Shannon said, “The Tioga Marine Terminal, DRS, and PhilaPort teams offered the right mix of capabilities and facilities, equipment, and support for us to grow our cargo volumes. We are working closely with our partners at the Port of Philadelphia and Tioga Marine Terminal on warehousing operations, and we now have the right partners for this expansion.”